The video game studio focused on the development of premium games with intense stories and distinctive visual style.

Stormind Games was founded in 2016 by Antonio Cannata and Federico Laudani, simultaneously with the announcement of award-winning Remothered: Tormented Fathers, the pure and realistic survival horror video game, which is the first title of the Remothered saga. 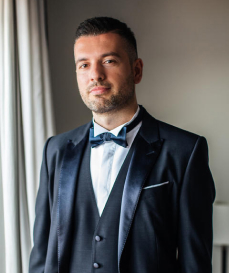 CEO and Co-Founder of the company, he is in charge of the company marketing strategies and business development, with a focus on brand building and deal-making with publishers and investors.

After graduating in Computer Engineering, he devoted his full-time work to combine business and video games, his two passions. Following a professional training abroad, that paved the way for bringing his own company to life with the right conditions, he started operating in the entertainment industry, and after two years, together with Federico Laudani, he founded Stormind Games.

In the last 10 years, he has specialized in brand building, marketing strategies and business development.
His enthusiastic leadership and his contribution in managing the company with the aim to always raise the bar have been awarded the “Management Star” Award from DStars in 2020, the award dedicated to Italian excellences in the game development industry, for his outstanding contribution in managing a game studio.

Co-Founder and Art Director of Stormind Games, he is in charge of art direction, lighting, look development, and post-production.

After earning a master’s degree in 3D and Graphic Design, he kick-started his career as Art Director, specializing in CGI.

In the last 15 years, Federico has worked on 30+ productions and now supervises the production department of the company to ensure everything goes off without a hitch.

Released in 2018, Remothered: Tormented Fathers was our first title ever, and on its first year out it was awarded as the “Best Italian Game” and got recognition by several specialized websites such as Rely on Horror (GOTY 2018), Eurogamer (Best Indie and Best Italian Game), and it was considered “one of the scariest games of all time” by Gamespot, just to name a few. 2018 was also the year in which Stormind Games won the DStars award as “Best New Studio”, voted by more than 100 game professionals! In 2020, the studio won the title of Outstanding Italian Company awarded by IVGA to the company whose contribution has proved excellent for the whole game development scene in Italy and in the International landscape. The same year, on October 13, Remothered: Broken Porcelain, the second title of the Remothered saga, was released worldwide on Xbox One, PC, Nintendo Switch, and PlayStation. In January 2021, we officially announced the development of our brand new first proprietary IP, Batora: Lost Haven, through IGN’s worldwide exclusive.

Available for PC, Playstation 4 and 5, Xbox One and X/S since October 20 2022, and coming soon on Nintendo Switch, Batora: Lost Haven combines the features of a hack & slash and a twin-stick shooter in a nonlinear interplanetary story-driven action RPG.

Our brand-first approach, the intense stories, and the distinctive visuals of our titles are Stormind Games’ trademarks. What does this mean? First of all, before we start working on a new video game, we always study the market to create games that can be considered unique compared to competitors. They must be suitable to be positioned as distinctive in the players’ minds. We aim at raising the bar with each of our titles. All of our video games must inspire and captivate players with their intense stories, and they must be immediately recognizable through their distinctive visual style. We are based in Catania, Italy and, as of today, our team consists of 60+ internal resources and several external collaborators including experienced 3D artists, developers, writers, and designers who had the chance to previously prove their skills with CGI movies and video games.

Awarded to the company whose contribution has proved outstanding for the whole game development scene in Italy and in the International landscape.

Awarded to the new Italian studio with the best debut game released on the market in 2018.

We officially announced the publishing partnership with Team17 to bring Batora: Lost Haven to consoles and PC in 2022!

We announced the partnership with Razer to integrate Razer Chroma RGB lighting into Batora: Lost Haven®.

The second title of the Remothered saga, developed by us, was released in digital and physical versions, on PC, PS4, Xbox, and Nintendo Switch on October 13.

We won the title of Outstanding Italian Company awarded by IVGA to the company whose contribution has proved outstanding for the whole game development scene in Italy and in the international landscape.

Thanks to a collaboration with video game publisher SOEDESCO, the physical edition of the pure and realistic survival horror game came out for Nintendo Switch, PS4, and Xbox One.

During the Italian Video Games Awards, Christina Seelye, Founder & CEO of Maximum Games, officially announced the new episode of Remothered and the collaboration with Modus Games through video.

PS4 AND XBOX ONE RELEASE OF REMOTHERED: TORMENTED FATHERS

Remothered: Tormented Fathers just made its appearance in the consoles world!

We won the DStars award as “Best New Studio” voted by more than 100 game professionals, as the new Italian studio with the best debut game released on the market in 2018.

The first title of the Remothered series, developed and promoted by us, was released for PC.